In any case, our technicians have the competence, experience and courtesy to clarify all your doubts, even just by phone, and, if you are interested, to send you a free parquet sample to your home in just 48/72 hours. . Without any commitment, do not hesitate to contact us !

Regarding the terminology and definitions of the parquet and wooden flooring, reference is made to what is indicated in the standard UNI EN 13756 Wood flooring Terminology .

The standard, which cancels and replaces the Italian standard U40.05.259.0: 1999 “Elements of wood for flooring Terminology”, identifies terms and definitions, essential to allow operators in the sector to speak a common and homogeneous language.

In particular, some important definitions are recalled below, useful for clarifying what is meant by parquet , for wooden flooring, by element, by multilayer element, for glued, floating or nailed laying, etc. (Table 2).

ALBURNO: it refers to the outermost part of the trunk and has a “whitish” color. It can be easily attacked by fungi and insects which, normally, they come eliminated during the drying phase of the wood.

BLUEING: we mean an alteration of the wood of a greyish color with bluish shades, caused by attacks of particular fungi. This imperfection does not change the mechanical resistance of the wood species.

HARD Z ZA: indicates the resistance that a material opposes to its penetration. It is important both for woodworking (cutting and sanding) and for the effect that on the flooring can cause various kinds of impacts, caused by accidental fall of materials, the effect of stiletto heels, etc.

The most common methods for determining hardness are:

Method J to nec: consists in identifying the load necessary to make a steel hemisphere completely penetrate the wood having surface of l cm ‘. The value is indicated in kq / crn ‘

M. Brine method L L: measures the diameter of the circular imprint left in the wood by a steel sphere (generally 10 mm in diameter) loaded with a load varying from 10 to 100 kg depending on the hardness of the wood (on average 50 kg are loaded). Hardness is expressed in Kgjmm2

FIBRATU R. TO: we mean the direction of the anatomical elements present in a stem or in semi-finished products and can be intertwined, wavy, deviated, irregular.

GLOSS: means the unit of measurement of the brightness of the paints, detectable with a suitable instrument and indicates the reflection of light according to a determined angle of incidence.

THE DRORE PELLENZA : we mean a treatment that has the primary purpose of improving resistance to humidity, water and variable environmental conditions.

ICiNORITARDANCE : it has the specific purpose of increasing the reaction time of wood to fire, in order to have the possibility to put out a possible fire.

BOAT : we mean the deformation of an element in the direction of the width of the face and can be concave or convex.

OXIDATION : we mean the term used to indicate the natural variation of wood, due to exposure to air and light, especially for the action of ultraviolet rays.

SPECIFIC WEIGHT: we mean the ratio between the mass of the wood and its volume. A volumetric mass of 800 Kq / rn ‘, at a humidity of 12, means that the m’ of wood containing 12 of humidity, weighs 800 Kg.

RESISTANCE TO WEAR : is the behavior of the surface when it comes into contact with other moving bodies such as, for example, the soles of shoes, wheelchairs, etc.

SWELLING : we mean the dimensional variation of the wood caused by an absorption of humidity.

WITHDRAWAL: we mean the dimensional variation of the wood caused by a release of humidity.

SPECIFIC WITHDRAWAL : we mean the dimensional variation in which the wood undergoes for each liter of lost moisture.

BRISTLE : we mean the cracking of the wood which normally develops longitudinally and fairly narrow, shallow and limited in length.

MIRROR : we mean an aggregate of cells arranged radially in the wood, which give rise to more “shiny” areas. This characteristic, present in particular in oak, is not a defect but a characteristic of the “first choice”.

VAPORIZATION: the treatment is carried out with the addition of steam and is useful for giving the wood certain effects such as color variations, better plastic behavior, workability, hardness.

Deformation of an element lengthwise perpendicular to the face. 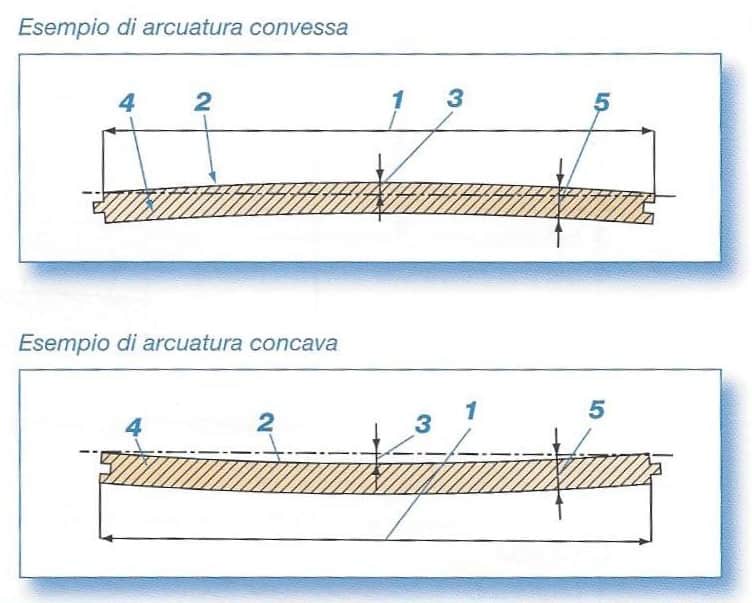 Deformation of an element lengthwise perpendicular to the edge.

Deformation of an element along the width of the face. 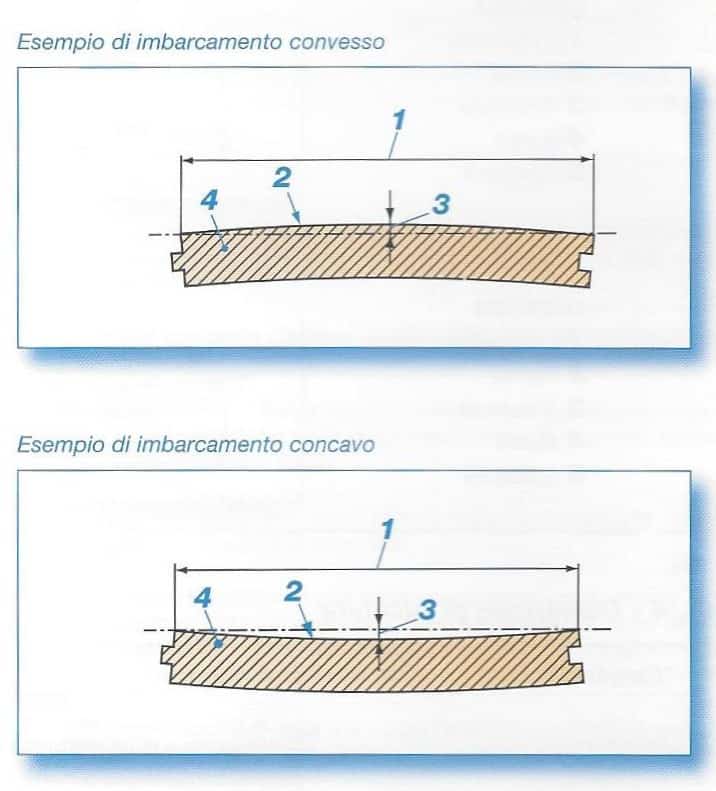 The standard also specifies the main and most common laying geometries and for each of these it provides the definition and an illustrative scheme (Tables 6a and 6b).

French term Definition Parquet consisting of elements with different and random lengths and a series of widths, arranged in direction
parallel 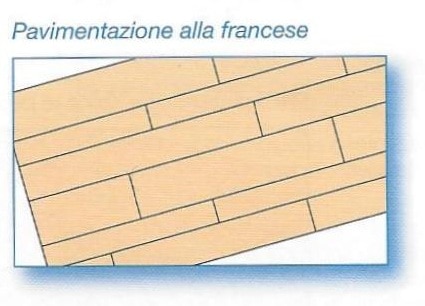 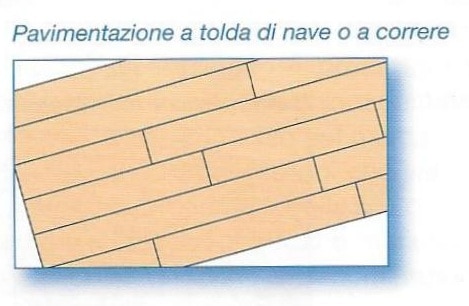 Term regular formwork Definition Parquet consisting of elements of equal length and width,
where the butt joint is at the center of the juxtaposed elements 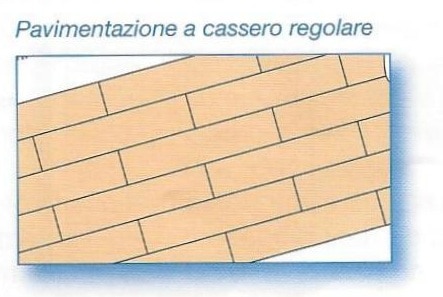 Term herringbone Definition Parquet consisting of elements with the same dimensions, having
heads cut at right angles, laid perpendicularly between
them, at an angle of 45 ° in relation to the directions of the walls
and / or moral / magatelli 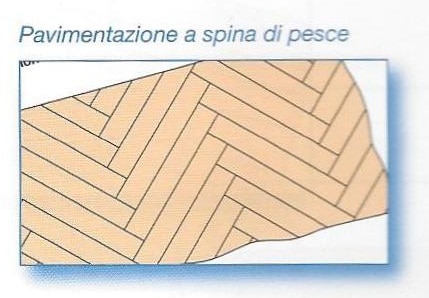 Term in Hungarian
Definition Parquet consisting of elements with the same dimensions, having
heads cut at an angle between 45 ° and 60 °, which are placed head to head at a right angle or at an angle of 120 °, forming parallel patterns 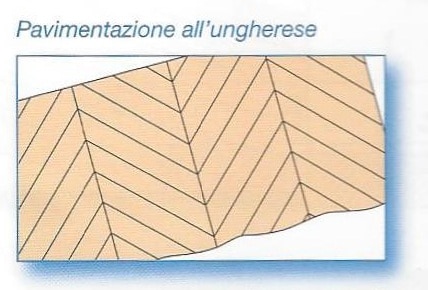 Mosaic term
Definition Assembly of slats, blocks or strips positioned on the edge
against edge and forming a square whose side is equal to
length of the lamella, block or strip. 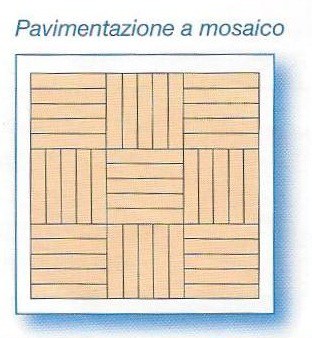